Poutine: a Ballad of Love and Regret.

For the sake of narrative- A brief yet stirring history of Poutine By: Timothy Murphy
May contain falsehoods.

It was a brisk and bright Canadian autumn day in the small town of Warwick Quebec, the year was 1957. Enter Jean “Poutine” Le Poute, a man from northern Quebec with a zest for life and a grizzly bear for a wife. Quite literally the man was married to a bear, Bear marriage or Bearriage as it was called in Canada in the early 1900’s. Bearriage was not outlawed until the fabled court case of Smith vs Yukon Territory in 1973. Le Poute wandered into a local restaurant of this small dairy town and by special request asked for French Fries and Cheese Curds. The owner Fernand Lechance obliged him, albeit confused while he did so. Upon reception of the two separate items, he put the curds upon the fries, smiled, pulled out a flask-like object adorned with 4 claw marks, and he poured a thick viscous brown liquid out of it. Gravy. Duck fat gravy to be exact, as he and his wife often hunted ducks together. Their son would grow up to be Hiroji Kiyotake, the creator of Duck Hunt. Anywho, upon seeing this Lechance began serving this mysterious dish, he named it after it’s inventor who’s friends called him Poutine, which is rough Canadian slang for garbage person. Also fun fact it’s pronouns Poo-Tin. #TheMoreYouKnow

Onward to the poutine adventure I had!

I found myself in Canada recently where the lovely dish of fries, gravy, and curd is most popular. I myself was in western Canada near the rocky mountains in Alberta, but the dish founded by the bear loving Le Poute is a menu staple at most eateries even out there. I myself ate it at as many meals as I could, as I am a garbage person, and this is a food item I myself would come up with. So now, let us begin a series of reviews and insights on all the poutine I ate because my intestines suffered heavily to earn this knowledge.

Big Cheese is an institution; it is verifiable a poutinerie for crying out loud! My main goal during my recent trip to Canada was to see beautiful scenic lakes and mountains and to eat an unholy amount of poutine. 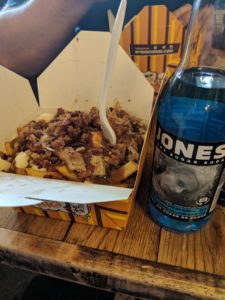 The latter was provided by Big Cheese. At this fine and well established chain, I was given a variety of wacky poutine options as well as classic poutine itself, I chose the very tempting and oh so savory “Hogzilla” menu item. The Hogzilla which gave me some dynamite poutine covered with some tender pulled pork and crispy bacon bits also added peppercorn gravy to the mix. Como se dice “It is yumbo time” in Canadian? All in all the place had a great late night bite feel, a real hole in the wall, and the poutine was dynamite, although sometimes I feel that adding condiments and extras like pork and bacon takes away from what poutine is in flavor. While the pulled pork was at times overpowering, I think adding crap is in the spirit of what poutine is all about, a giant mess in a box that you eat! I should note that I couldn’t finish it, because at Big Cheese’s they look to put enough weight on you so that you’ll survive the oncoming winter. All in all, a great first stop on my poutine tour! 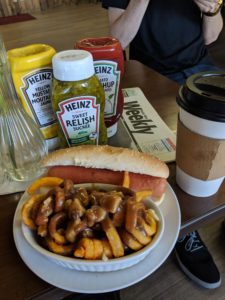 So as a preface, getting to the Arcadia Café was an accident, my buds and I were headed to the eastern stretch of Alberta to see a dinosaur museum, but we forgot to eat breakfast. Initially, we thought we could hit up a Tim Hortons on the way. Well, that didn’t play out like we thought it would as we found our route hortonless for 30 miles, and we needed food. We stopped off at Beiseker, a town straight out of the Canadian remake of Deliverance. Inside this town, we found the quaint, albeit unorthodox Arcadia Café.At this sweet local cafe we stopped for breakfast, I ordered a hotdog, and curly fry poutine, because I am a monster and the name of a meal should not confine me to any types of food! Real Talk, curly fry poutine is a move and a half! I think curly fries, like the ones we got in school with a little extra zest, those were awesome! The best thing for them is to be put into poutine, even if it is backwoods café poutine! I also believe that Canada has a large stockpile of quality cheese curds, which is dope. Solid meal, weird town!

Small Note: The town’s mascot was Squirt The Skunk. And that my friends, is quality branding.

Once we had soaked in all that dinosaur goodness from the Royal Tyrell Museum of Palaeontology, we went back into town to get a quick bite and then drive back to Calgary for more adventures! While in the town that held what I learned was one of the largest and highly regarded Dino museums in the world, it dawned on us all that the town very much understood what brought the tourists and money to them. Everything and its cousin thrice removed was dino themed. 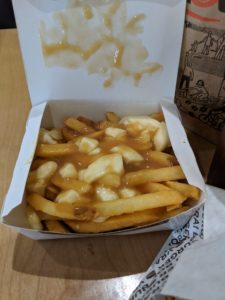 Dino statues, dino art, dinoshops, and dino metal work was seen on all of the light posts and traffic signs. The place was delirious for dinos. We then chose to got to A&W which is a generic fast-food chain run by a root beer company. And there I had my first fast food poutine! It was surprisingly good. It is at this point in my journey that I realized that you can’t really make bad poutine, the ingredients are too incorruptible. It is my present opinion that if you had bad poutine, they either used spoiled or poisoned ingredients or you didn’t eat poutine but something that called itself poutine. Just to clarify, this was not nearly as good as big cheese’s, or even Arcadia. But I still enjoyed it, and would order it again for sure! Poutine really lends itself to being fast food, so greasy ingredients and savory gravy from more animal fat just taste really good! All through the fries left something to be desired, but again, it’s fast food I’m not gone rake A&W over the coals for fast food cheap ingredients ya dig?

There is something to be said about the context of a meal, week old pizza for lunch is sad, but fresh pizza after smoking a joint is fucking nice! 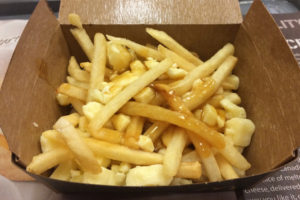 So let me state this, Poutine was meant as a late night drunken snack. (to the entire collective population of Montreal, I know that to you that is a very obvious statement!). But yeah, after a wild bar crawl of beer, billiards, and brotherhood, we came upon a McDonalds! AND….. IT….. WAS….GLORIOUS! Mcdonalds Poutine was great and easy, and everything my dumb drunk ass needed. It made me angry that my local McDicks doesn’t have any. It was probably really so/so poutine, maybe better than A&W because McDonald’s fries are made of magic, but all in all, I think soberly it would have been very ok. Still though, in the heat of the moment, they were my salvation late at night on the vibrant streets of Calgary!

After an extraordinary day hiking around Lake Louise and Lake Moraine, my compatriots and I settled into the village of Banff. Banff National Park is a beautiful place with purple mountains majesty and Cerulean blue lakes that make you feel like the early American transcendentalists! 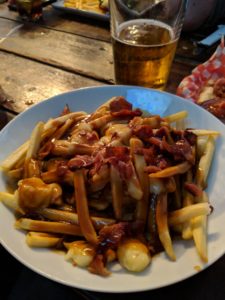 Their poutine game? Not too shabby! We settled in to eat at a local dive, The Beaver Tail! At this lovely establishment, I ordered the poutine and pierogis, I felt my intestines weren’t clogged enough as it was! When ordering the waiter, a very handsome Australian man, asked, “Do you want bacon on it?” I asked, “Which one?” he replied, “Yes”. I affirmed his yes, and was gifted bacon bits over all of my food, truly quality service! The poutine was very middle of the pack, but I had no real complaints. I feel that bacon bits are kind of a perfect addition to poutine as it is a great elevator in any bar snack / comfort food adjacent dish. Plus just errantly tossing bacon into a dish because you can is a very poutine thing to do. It was a great place to start a night of bar hopping, and it wrote itself a pleasant chapter in my poutine periodical! Also, they had a shot wheel that you spin and whatever it lands on you have to drink it. I got a shot called “The 2 Day Hangover” Which I felt was a very appropriate shot gifted by fate.

So between the last poutine at my first stop on my Banff bar crawl and this poutine and place, my buddies and I had,
– Been thrown into a never-ending purgatorial game of pool that took almost a half an hour.
– Found an underground bowling alley bar
– We most definitely were the “really loud Americans” 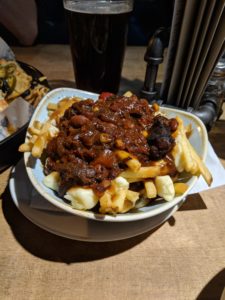 – Gambled in a backroom mini-casino
– Farted all over a souvenir shop
In no particular order, mostly because remembering the order is a little tricky for my brain presently… SO at the end of our adventure we set down for a late night snack at the Banff Ave Brewing Company and got a lot of nachos, and some sick Ground Bison covered Poutine!!! The braised bison was delicious although it was very overpowering. Great flavor but it wasn’t that iconic poutine flavor I had come to love. Solid place with solid beer! I feel this poutine while overpowered, is still one of the best I had on the whole trip! I was also excited to eat exotic bovine meat! Definitely would have been a great end to an adventure in poutine, however, that was not where it ended sadly!

Remember how I mentioned the context of a meal is important? Well, have you ever heard a phrase or a sentence that makes you feel pity? Like “I’m working the overnight shift on Halloween” or “Sorry the ice cream machine is broken”. 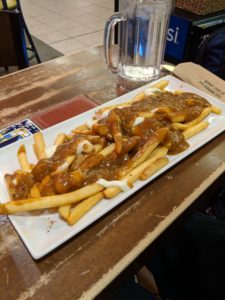 Yes, they are negative statements, but with the context of human society, they become so much worse. Well let me give you a new one, “We grabbed some poutine at the airport Chili’s before our red-eye flight home” First off, I’m not throwing shade at Chili’s, except I low key am. I don’t like big national chain sit down restaurants. It’s very hipster and lame, but it’s how I feel, deal with it. Chili’s, however, had poutine, which was ridiculous. We had fries, and then like queso, coated in a very peppered peppercorn gravy. It was very southwestern meats northeastern. Reservations were had, but I ate it, for science of course. Not bad, definitely not the best a southwestern poutine could be, but it was honestly still kinda good. Probably the lowest poutine on this list, but like I’d eat it again. I’d need a beer or two first, for sure.

oh also, I shatted like a fucking monster and was constantly constipated on this poutine heavy diet, just as a fair warning…

So, that’s my poutine review of Alberta, Calgary / Banff! I’ll probably do one if I do a full weekend in Montreal, which I feel like I might do! As always thank you so much for reading my dumb jokes, and cartoonish writing, I really appreciate it! If you like what you saw, or hated what you saw, or like anythinged what I just wrote, please leave a comment, or send me a message in my contact page! Peace and Poutine upon you and your bear!