Best Beer in Providence? Maybe that’s a bit much, but not by a lot because Long Live Beerworks is amazing! I love their beer, and I love the innovation, invention, and inspiration of this fantastic young brewery, and would love to talk about it!

Let us set the scene.

I had recently graduated college and was a struggling young Intern when my buddy Dan asked if I’d join him on an adventure into Providence to check out this cool new brewery. After that folks it was history, I fell in love at first sip, I think it was the Course Grind Coffee Stout, Heck Hound Red Ale… and a casked version of Lil Sippy! a great set of brews that night. Twas also a great time spent with a great friend, at a place that made you feel great! After that first visit, Dan and I found ourselves at LLB a lot. I fell in love with the digital media presence of LLB, I loved drinking their beer, and I really really enjoyed going to their cannings and the brewery’s hole in the wall taproom. It was awesome, so let’s dissect what makes me love LLB; hopefully, this piece turns into a series on breweries I really love and recommend, and maybe if I feel like being a dick, later on, breweries I think y’all should avoid! But first, a place that I will often tell anyone who will listen that you must, MUST, go to if you’re in Providence!

LLB (Long Live Beerworks) is as of writing this a quaint hole in the wall brewery with a 7 barrel system in western providence, but I know that they are gonna be moving, and it is gonna be absolutely amazing! But I’m getting ahead of myself and am now writing another introductory paragraph, Now! Let’s talk about the cute little city brewery that won my heart just about 2 years ago of me writing this!

Before we dive into the beer, let’s talk branding, because that is 1. A significant part of my profession and B. Long Live kind of absolutely crushes it. I had the opportunity to discuss their design and brand with its creator Jessica deBry. Jessica, the master designer and artist behind LLB, is an actual genius. Verifiably so if you have seen any of LLB’s cans or beer art or glassware, or hats, or shirts, or stickers, or growlers, or taproom. 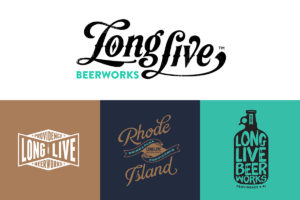 Yeah nerds, she did the art for the gosh dang taproom, AND PAINTED IT HERSELF! Fun fact about Jess she’s a big fan of the beers with mosaic hops. She is also a big fan of LLB’s ghost series which is a rotating berliner weisse and it’s a dynamite series ( According to my friends who like sour beers. I don’t, I get it, they’re good, just not within my palette’s range).

So I really just wanted to take a quick stop to commend Her on the design because most breweries have to fight tooth and nail to stand out in the can graphic design and branding department. You see my darling reader, the craft beer can/bottle design game is a heavily saturated market with every brewery and their mom designing beautiful interesting and brand specific art for their cans/bottles. Each Brewery needs to be doing their own style for every can but also need to do a unique and eye catching art for each different beer they brew, and also name it something that I’ll remember! You might think that last comment silly, why can’t I remember the beer I liked from the packie shelf? Simple, tell me which one of these beers is a real beer name, and which is a fake beer name?

Fun fact: All of those are actual beers by actual breweries, all solid beers if I’m being honest. I Wanna Be A Bear(from LLB) is delicious and most definitely a hiking beer, and I missed that canning because I’m an idiot, but I got to have it on tap the other day! I really wanna just speak the praises of the clean branded look every beer receives, whether it is a beer on tap, a cask they made that week, or a special canning they are doing. I’ve never had a beer from LLB I didn’t like, I also never had one that wasn’t well designed for! Which may not mean a lot to everyone, but it means a lot to me! Oh and I’d be remise if I didn’t talk about the breweries glassware and merch. I own 3 separate formerly 4 separate LLB glasses. I lost the 4th in a tragic sink accident. They have great unique glasses, and they keep making new ones! Not to mention my dope LLB T-Shirt I wear when I wanna look cool. Just solid design work across the board. Might buy a winter hat or a tank top from them soon… Who’s to say?

So, the cans are cool and I dig the merch that they sell, but is that all I am? Some easily marketed consumer? No, this place has heart and it’s time we talk about it. After visiting a couple of times in the winter of 2016-2017 I got the distinct understanding that this place had to be amazing, because who would cram into a small brewery on a cold night just to stand and drink beer. Anyone who’s tasted a “Firkin Friday” cask at Long Live would probably raise their hand quite promptly at this moment! Moving forward from the cold times once spring hit I totally understood why this place crushed it! It has this nice outdoor area and its storefront is wedged right next to a cool hole in the wall pub, and there are other great places to grab a bite and carry around with you that are only short walks away!

That summer after I got my first big full-time marketing position and had good money to spend, I was there whenever I could be! The atmosphere was great, it was lively and cool, you have the cute little bar on the inside that peaks into a full brewery that you can just take in, AND this outdoor area is just like a really nice patio you can chill at a wall counter and chat, it is very hip. Providence is notoriously artsy and hip and cool, at least that’s my opinion of the city. LLB reflects that in a lot of ways, especially its customers and it’s staff! Everyone there seems so cool, so authentically interesting.

I’ve been to a couple cannings at Long Live, and they were all pretty tight, My fave was my first actually! Cereal Milk march 22nd 2017. the collaborative nature that Long Live upholds like a champion of unity and comradery is no secret, and it is often shown in beers like Cereal Milk! Cereal Milk was/is a collaboration with Providence Donuts an iconic Providence institution of amazing donuts. I highly recommend them as well, they make a damn good cruller. The beer was based on PVDonut’s fruity pebbles coated donut. We even got fruity pebbly coated donut holes/munchkins from the lovely PVDonuts people at the event. It was wicked pleasant, and every beer nerd there was having a good time on what I would call a perfect spring morning! 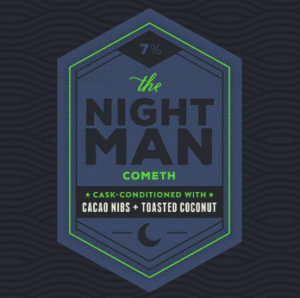 I think it is very indicative of a place (Bar, Resturaunt Brewery, market, etc…) if the people who patronize said place are of this high a caliber. I think I’ll round out this ramble about the people and the ambiance with the Owner and Brewmaster, Armando. I’ve had like 1 or 2 passing conversations with the guy, but like he’s so fucking cool. He’s like The Fonz, but like less cheesy and a significantly more capable brewer, 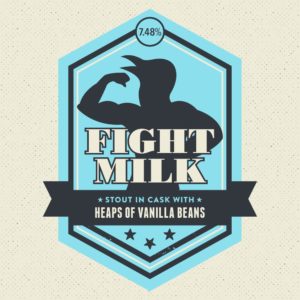 I imagine. He’s almost always there when I visit, and even though he emits an aura of just “coolness” he’s also wicked approachable and nice, all the people who work there are nice! OH and Erika she’s wicked nice, I think she’s also always there and also someone who emits coolness, and We talked about Always Sunny In Philadelphia because some of their beers have received Always Sunny themed names like “Fight Milk” and “The Night Cometh” (Which the Design Wizard Jess makes the coolest designs for!) Just… Damn… these people are amazing. #NuffSaid # ALSIPFans

I guess I should talk about, I dunno… The Beer? Ok, let’s start with Cereal Milk, it has all of the above that I liked, It was a great experience getting it, the can looked dynamite, so how’d it taste? In a word, “Fruity”. With the passion fruit they used in it and the hop-forward mentality with this beer, it was just wild! 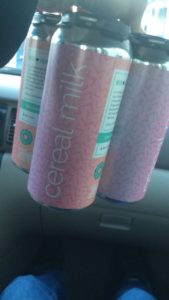 I haven’t had it in over a year now, but I can say it’s one of my fave beers of all time. Even if the name made me skeptical at first! I mean I like drinking cereal milk! Who doesn’t? But I thought since Milk stouts exist, that they were gonna put cereal milk into my IPA and well, I was concerned. Concerns were easily dashed because LLB always come through for me! 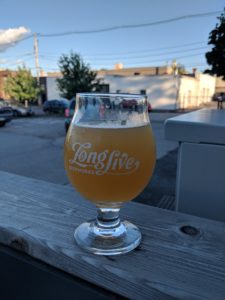 That said, I think my favorite they always have is Nitro Cart which is a Coffee Stout, I always get at least 1 pour of that whenever I go, because I like it when my beer tastes like coffee! And I will always get their casked beer on their Firkin Fridays, because they are always so well named, and they are weirdly consistent even though it’s something new and experimental every time!

As I sit here typing on the now 3rd page of this post, I realize I need to stop, for brevity. But, it should be noted that I could do a full write up on LLB, a page on each beer, maybe a dissertation on my potentially less than healthy man crush on Armando and in the future I might try to write more about breweries! LLB is one of several places that really touch my heart and my liver, and I value these places because I get to share them with my friends, and I get to discover new friends while I’m there. For stuff like that, I’ll always be endlessly grateful to you Long Live Beerworks!

I was gonna end this post with a line like “Long live Long Live Beerworks” but that is so fucking cheesy. Soooooooo………. Here are the links to LLB and I hope you all visit them, and check them out! Oh OH oh, by the way! They are opening up a new location and it’s gonna be awesome! I don’t know a lot of the details but I will update this post once they announce everything!!!!!!