Uh… weird day here folks. Doing a reaction piece is new to me but here we go, HOT TAKES ONLY!

As I began my workday I like to see what’s trending on social media, maybe see if I can’t trend jack something and get my company some attention in the digital sphere. Today I was met by the #Bumblebee and I thought to myself, “oh no! The Bees are dying, and it’s getting worse”. I was wrong, and at this time, find myself searching for the words to describe what exactly I experienced next.

Turns out, The aged and tired Transformer series, has a brand new prequel spin-off film that answers the long pondered question from the first movie, “What was Bumblebee doing on earth before all of this?”. The movie also answers the very Fetish-riddled definitely unpondered question of, “What if, like a woman, and bumblebee had a romantic relationship?” Mhm…….

Bumble reestablishes his vintage original look as a yellow VW Punch Buggie, and finds himself acquired(Car-Jacked) by the always amazing Hailee Steinfeld. 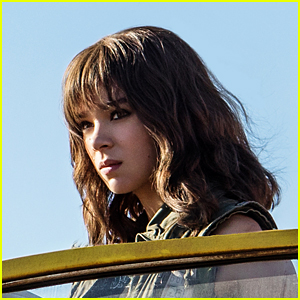 We have some opening establishing shots with a ghostly narrative echoing out about the “Mystical bond between man and machine”. With Steinfeld driving a moped of sorts and being on the coast, and then taking a car left out at a junkyard/used car lot? with keys in it. Pretty innocuous carjacking, but I’m not choosey for a perfectly Lawful Good protagonist. The movie seems set in the 70-80s era, so before the 1st Transformers movie, and everything seems normal, albeit dramatically leading up.

We find ourselves in the interior of Steinfeld’s garage when the car she just stole starts acting funny, and she begins pondering about the morality behind car salvaging. Upon investigating the car she innocently looks underneath the car, and suddenly two glowing eyes illuminate, and we have out titular character standing, much shorter than I remember, in her garage. We have the exposition of Bumblebee’s muteness. And Steinfeld asks, “What is your name?”. On to a sequence of clips in a montage to give you a proper taste of the movie. I would like to first take note that during the garage bit, Steinfeld is our quintessential heroine in the fact that she is not freaking the living hell out from the car based automaton she witnesses.

Ok. So actually in that whole, not scared of a robot transformer you are seeing for the first time thing. Steinfeld almost looks entranced by Bumblebee in this scene.

Now that’s fine, robots are cool, but we get a couple more clips that kind of push this a little further. Bumblebee presses his robot face to her hands, in a very sweet trusting moment, akin to Hiccup and Toothless from How To Train Your Dragon, orrrr….. more romantic…

We then see some action scenes, a little irresponsible driving, and… holy shit! Is that John Cena? Fuck yeah! Sorry, got distracted. But yeah, we see a scene where Steinfeld dives into deep water washed over in moonlight swimming down towards a sunken Bumblebee. She then does some way more overtly romantic face touching, with a much less entranced, more romantically longing look in her eye. Which is when I paused the trailer, to go WTF, and continued to see bumblebee save her from people, Starscream or a Starscream knockoff presenting himself. Bumblebee being heroic.

Oh and then we see a tender embrace between Steinfeld and Bumblebee. During this very sweet 100% romantic moment, Steinfeld gives this passionate speech to our mechanized hero, ya know the same kind of speech Adrian gives Rocky, or Ingrid gives Hiccup, ya know, when your significant other boosts you up so you can be your best self. 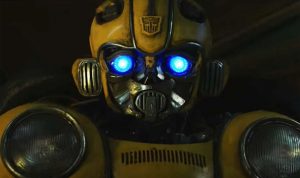 Bumblebee who is basically convinced he’s gonna get a robo-blow job or waxed or I dunno, he goes off does some more heroic stuff and Steinfeld voice over rings in “This is why you’re here Bee” which is her calling him “Bee” a cute pet name.

The trailer then shows Steinfeld and Bumblebee having a cute moment with Rick Astley’s “Never Gonna Give You Up”. Which Bumblebee doesn’t like? So yeah.

We finally got our B-Movie 2. Bring on the unconventional Rom-Com between a shape-shifting Robot, and Hailee Fucking Steinfeld. Because anyone who says she’s not being romantic, it is by accident, or that she is just overdoing it, or acting poorly, or that I’m reading too much into this. Anyone who says those things can fuck right on off, because Hailee Steinfeld is an incomparable talent who’s acting is depthful and poignant and none of it is by accident, and none of it is done poorly. FIGHT ME.